We have great readings for Lent 2. Genesis 15:1-12, 17-18 is the most quoted, theologically pregnant and productive text in all of the Old Testament, with its “the Lord reckoned it to him as righteousness.” But did Genesis mean what Paul had in mind in Romans? 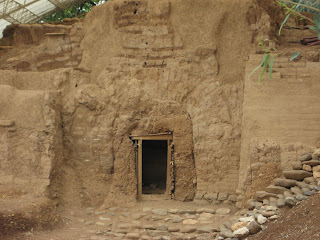 Genesis 15 begins with “After these things” – meaning chapters 14! First, Abraham led 318 (an astonishingly exact number) men from his home far in the south to the far north to Dan. When I take folks to Israel, I love to show them the Bronze Age gate in Dan – as a place where Abraham came! Not many places in Israel do this. And then we have the curious Melchizedek passage – much beloved in the New Testament and early Christianity, and entirely mystifying to us.

God reiterates the promise God made in Genesis 12 – and Abraham asks, like Mary centuries later, “How?” God here is a promiser. Americans love God-as-promiser – but they are thinking what God will do for me this week. God’s promise in the Scriptures is centuries – centuries! in the fulfillment. 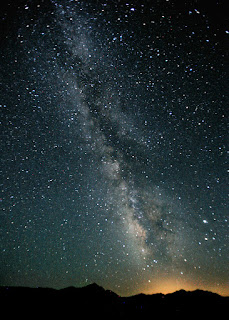 Abraham is asked to look up at the stars and count them. We can actually do this today, pervaded as our night skies are with so much ambient light. But Psalm 8, Job 38ff and Genesis 15 know of a darker – or brighter – sky, with countless stars, maybe like the sky I saw as a child, or the sky you can see if you go out West someplace.

That key verse 6, quoted as manifest proof of the life of faith vs. works in Paul: Abraham believed. His “belief” was trust, consent to God’s future, a commitment to stick things out, fixing his life on God’s direction. This was “reckoned” (imputed?) to him as “righteousness.” Certainly for Paul, and even in the Old Testament, righteousness is relational. Even when you live out the regulations of the Torah, it is because of a trusting, grateful, intimate relationship with God. 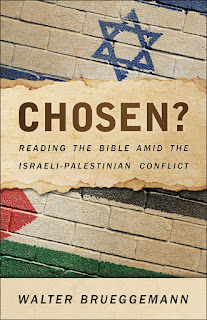 You have to admire Abraham for taking God’s promise into his own hands, for making it happen – by adopting Eliezer. Rational, practical – but not God’s plan!  The promise of the land has been hugely problematical through history.  We might wish God had promised a great people, and a blessing – but the land pledge has precipitated so much conflict. Walter Brueggemann’s new, short, and incisive book, Chosen? Reading the Bible Amid the Israeli-Palestinian Conflict, is so very helpful in sorting out the issues.

The vision here of birds swooping down on bloody carcasses might make you shudder; the gauntlet of fire between the slaughtered heifer, goat, ram, turtledove and pigeon feels like an ancient agrarian hazing… but it was an ancient covenant ceremony of immense purpose.

Psalm 27. So eloquent, the shining gem of all the Psalms, I would say. What do we desire? God’s presence? The “Beauty of the Lord” is undertreated in preaching – and I wrote a whole book on preaching called The Beauty of the Word to try to capture why the beauty that is God figures so prominently in preaching.

Our Epistle, Philippians 3:17-4:1, is rich in theological implications. Paul, not bashful at all, invites imitation! I don’t do this so often, out of humility, and a frank realization that my people should not imitate me. I wonder if we clergy should dare to hold ourselves up, in some humble, self-effacing way, as exemplary of a life with Christ.

How odd for Paul to speak of religious, spiritual people who claim to follow Christ as “enemies of the cross”! Back then, Paul saw grave danger in those who believed Christianity was all about the mustering of good deeds. Today it’s more about feeling and emotion – or maybe what Paul says: “Their god is their belly, their glory is shame.” We are first and foremost consumers: we buy, we eat, we collect, we shop more, we drink more, and it’s all about me, how I feel, my sense of fulfillment. We even enlist God to help us consume, to feel full – but can’t we see how our minds are really stuck on “earthly things”?

What once was shameful we now glorify: the “seven deadly sins” (greed, gluttony, sloth, lust, anger, envy and pride) now describe the good life in America! We fantasize about and are intrigued by what is shameful – because we’re after a rush of feeling, a higher high. But God isn’t a feeling more titillating than any other: God is a stable rock enduring every oscillation of feeling. God you cannot buy or consume. God calls me out of self-indulgence, away from it being all about me, and into the adventure of God, far grander than me and my small satisfactions. Preachers have to help people with this….. 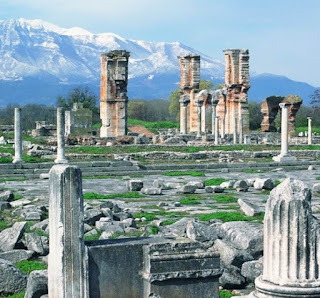 Citizens of Philippi took great pride, as settled military veterans, in their membership in the commonwealth that was the Roman empire; their citizenship (politeuma) wasn’t Greece where they were located but Rome! Paul plays on this: for Christians, our true citizenship is in heaven: it was to God’s kingdom we belong. And try as they might to straddle both worlds, you have to make a choice, a big choice but also a lot of little choices – just as we do as Christians who belong to heaven but are pressed to get too enmeshed in the habits and ideals of our culture.

“We await.” We live in anticipation of something that has peeked out from behind the veil but is not fully revealed: our mood is Advent-ish, waiting, longing – and not for just any Savior! The emperor claimed to be soter, savior – but of the upper echelons, keeping a heavy boot on the lower classes. Ben Witherington: “Paul was offering a very different sort of savior, one who was for everyone, even those in the lowest status in society, even slaves.”

We await a Savior, the Lord Jesus Christ, who will change our lowly body to be like his glorious body, by the power which enables him even to subject all things to himself (Philippians 3:21). In my book, The Life We Claim: The Apostles’ Creed, I tried to clarify what this “glorious body” is about: “When we speak of the resurrection, we do not mean that Jesus’ soul survived the death of his body, and yet we do not mean the mere resuscitation of a corpse. The risen Jesus is not recognized, but then is recognizable. He can be touched, but then he pulls back. He materializes, and then he vanishes. Paul spoke of the resurrection as involving a ‘spiritual body’ (1 Corinthians 15). A body, yes, but spiritual, not merely a spirit, but a body, totally transformed, animated entirely by the Spirit, not liable to disease or death. So for those whose understanding of anatomy makes a resuscitation seem ridiculous, the Bible narrates something different, and far better – better even than the immortality of the soul. The Bible promises the resurrection of spiritual bodies.”

It’s a “lowly body” though now, not yet glorified, and something of a struggle, like a burden – and yet the Body is God’s temple (1 Cor. 6). Paul’s tone in all this is never castigating or harsh. How tender is he? How tender must the preacher be? Where else but in the Church do you get called “beloved”? Henri Nouwen’s book, Life of the Beloved, articulates God’s hopeful message for each of us who live a world where “beloved” doesn’t compute. 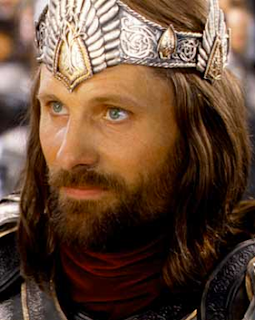 Paul and the Philippians share love (review the origin of the church in Acts 16!) – but their love isn’t spontaneous affection, or the fact that they think alike or enjoy leisure activities together. It is Christ who is their friendship, who cements their relationship; it is Christ they share, and their zeal for the present work and future hope of the kingdom of God. Love? “My joy”? “My crown”? Hard of me not to think of the consummation of Tolkien’s The Return of the King. The crown falls to the new king, Aragorn, but he yields to the wonder of the small people, the hobbits. They are friends. As Merry famously said to Frodo: “You can trust us to stick to you through thick and thin – to the bitter end. You can trust us to keep any secret of yours – closer than you keep it yourself. But you cannot trust us to let you face trouble alone, and go off without a word. We are your friends, Frodo.” This is the life of the Body of Christ.

Luke 13:31-35. Finally we come to the Gospel. Jesus has Paul’s tender love – for Jerusalem. Its people, of course, but the larger dream and destiny of God’s chosen place. Warned by the Pharisees (was this a friendly warning? or are they trying to goad him into shutting up?) to flee, Jesus has a snarky response, calling Herod a “fox.” His poetic declaration about his as-yet incomplete work (today, tomorrow, third day) is haunting, beautiful, courageous. 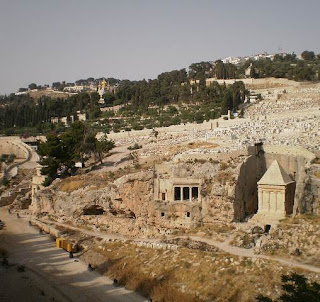 His lament is moving, and picturesque. If you get to travel to Jerusalem, you often get your first glimpse of the old city as you round the crest of Mt. Scopus. Tourists get giddy, or play that old song “Jerusalem, Jerusalem” on the bus’s loudspeakers. Jesus at this point fell on his knees and wept – just as he’d wept for his friend Lazarus on arriving at his tomb. He would have seen, in the Kidron valley, the “tombs of the prophets.” So he wasn’t just recalling history. He sees and points to their tombs! – a haunting glimpse of his fate to come. I even wonder if “stoning those sent” might look forward to Stephen, the first martyr, which Luke of course knew about.

My friend Jeremy Troxler, on the last night of our awful General Conference in February, suggested that if you look at a religious institution you love and it is a travesty, profoundly disappointing - or if you know things you know, try to explain them to other people, and they just don't get it, then in that terrible, painful, frustrating place, you are very close to the heart of Jesus. 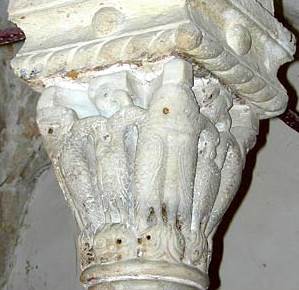 And then the lovely image of a hen gathering her brood. It’s lovely – and not just because it’s a feminine image. In the traditional “Upper Room” in Jerusalem, the site where pilgrims have believed (wrongly, but still…) the Last Supper transpired, there is a carving on one of the columns of a pelican and her chicks. Evidently (is this true?) a mama pelican goes out in search for food for her chicks. But if everything is dried up and she finds none, she returns to the nest, pokes holes in her own flesh with her beak, and the chicks feed on her. Eucharistic. Cruciform. Sacrificial gathering. Grisly, and lovely.
*****
Milky Way photo by Steve Jurvetson