Preaching to those who adore, & those who loathe President Trump

How can we do a better job of preaching to people who adore Donald Trump, and to those who loathe him, when they are together in the pews in front of us? 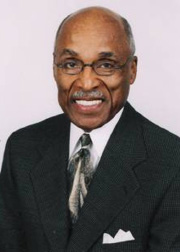 When I’m constructing a sermon, I’ve often remembered what Zan Holmes said in a preaching conference years ago.  He spoke of a “gallery” in his office, photos and images of saints and heroes, and he imagines them looking over his shoulder, cheering him on, reminding him to be faithful and courageous.  I have Martin Luther King, Dorothy Day, Martin Luther, Francis of Assisi, and Jesus himself with their eyes trained on me as I type right now.

I’ve expanded this when I’ve taught preaching myself – to include, at least in your imagination, who will be coming on Sunday.  The woman whose husband said “I’ve never loved you,” the man who just got fired, the mom whose daughter hates church, the dad whose grown son won’t return his phone calls.  And then also the people who won’t be there.  The unchurched, the homeless, a refugee, a rabbi friend.  And maybe my seminary professors, although I worry that when preachers prepare as if the professor of exegesis will be there, the sermon might be a touch on the academic or even pedantic side. 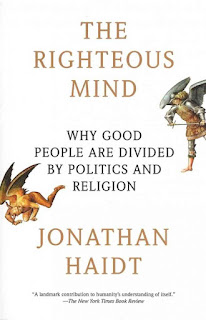 As of this week, I am rethinking all this – in light of something I found in Jonathan Haidt’s The Righteous Mind: Why Good People are Divided by Politics and Religion.  It’s a great book that goes a long way toward explaining what we’ve seen in the past few months:  Clinton supporters being absolutely baffled and mortified by Trump supporters, and Trump fans mocking and harboring anger toward Clinton supporters.  Studies show that different people have different “taste receptors.”  To one group of people, if you speak of inclusion and caring for those in need, they nod warmly; but others are numb to the same appeal, or veer toward thoughts like personal responsibility and fairness. 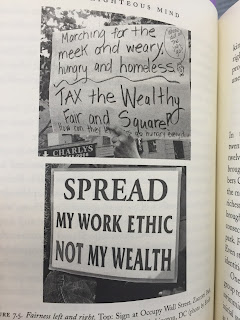 Everyone wants “fairness,” but it means different things to different people, as Haidt shows via photos.

Family of origin proves to be the origin of much of this: you’re 2 years old, your family drives by a beggar; in one family, words of sympathy are spoken or money is handed through the window; in another family, dad says “He should get a job.  I dug ditches when I was 17 just to get by.”  Liberals think authority should be questioned; conservatives think it should be heeded.  But “think” is the wrong verb.  It’s way down in the gut, way prior to reasons or facts.

Haidt gathers up all these studies and suggests that people have six such “taste receptors”:  caring, loyalty, fairness, authority, sanctity, and liberty.  Most people are strong on a couple of these, and lacking in others – which then is why we don’t comprehend what others are saying.  My first thought about this, regarding preaching, was basically Aha!  I’m talking about caring all the time, but a large number of those listening are authority/sanctity people.  No wonder they look puzzled.

Haidt would ask why we don't find ways to balance our appeals.  If I have a text that speaks tenderly about caring, I would be wise in that same sermon to find a way to speak to the importance of holiness.  If I am weighing in on the authority of Scripture and the importance of adhering to God's law, I need somewhere in there to speak of God's merciful loyalty to us, or of the joys of freedom.  If I want to underline the obligation to welcome strangers, and even immigrants, I might find a way to emphasize why law and order matters - which can play two ways, right?  Those who would reduce immigration think the law should be enforced - but we might agree if we are speaking of acts of violence against immigrants.  When you compose the sermon, think of Trump foes and Trump fans, and intentionally say something to both of them that will challenge but also comfort.  Press more than one button. 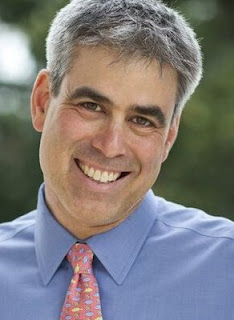 But then I read one of Haidt’s paragraphs, and a light bulb popped on in my head.  After retelling how he advised had Democrats to speak the language of and appeal to the emotions of those on the other side, instead of continuously affirming those already with them and further alienating those who aren’t, he added this: “I advised Democrats to stop dismissing conservatism as a pathology and start thinking about morality beyond care and fairness.  I urged them to close the sacredness gap between the two parties by making greater use of the Loyalty, Authority, and Sanctity foundations, not just in the ‘messaging,’ but in how they think about public policy and the best interests of the nation.”

Bingo.  Haidt helps me understand why much of what I say gets misunderstood, and he hints at ways to connect – but maybe more importantly, he dares to suggest that I might need to think more thoroughly about how I think.  As I try to take into account various kind of people and their passions, might that help me reckon with the diverse dimensions within Scripture and theology itself?  I might find a better strategy, and even be truer to what God is actually about.

Sure, we have an inevitable emphasis on caring.  But there is much authority and sanctity language in the Bible and our theology.  Could it be that if, instead of thinking just about Martin Luther King, Dorothy Day, and the woman whose daughter hates church, we conjured up a new gallery?  What if in sermon preparation I reminded myself that there are those who say Authority is to be questioned, and others who think it is to be heeded, or that there is the guy who loves the slogan “Tax the wealthy” sitting not far from another guy who loves the slogan “Spread my work ethic, not my wealth,” that a woman there is deeply sympathetic to the plight of a friend who had an abortion sitting not far from another woman who bore a child after testing indicated a defect was certain, so highly did she view the sacredness of life?  Not only might I find the way to reach all of them, if I intentionally appeal to all of them, but I might actually notice things in the text, and in our theological tradition I’d missed or just underemphasized because of the way my own brain/emotional self is arranged.

So I am going to experiment for a few weeks, especially in my weekly preaching blog I hope you’ll get via emailing me.  Dig into my text, find what I’m led to say, and then ask if I can say something, anything, with integrity, that appeals to the opposite set of taste receptors.  Is there something in this text for both sides?  I suspect the answer is Yes – and I might get a fairer hearing if I can offer something to everybody.