The longish John 9 text is about the blind seeing – and so I find myself drawn to the remarkable Old Testament texts, 1 Samuel 16:1-13 and Psalm 23, the prototypical texts about seeing as the Lord sees.  At my place, we will be having Holy Communion – so I am especially fascinated by “Thou preparest a table before me,” which is so promising… But why add “in the presence of my enemies”?  Is this more pertinent now than ever?

I like listening to music while pondering texts, and what better than “My Shepherd Will Supply My Need,” and “The King of Love my Shepherd Is”? 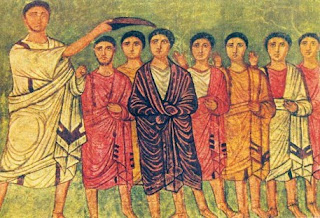 So: Samuel’s clandestine visit to Bethlehem in 1 Samuel 16 (depicted here from the 3rd/4th century Dura Europos synagogue in modern-day Syria).  Saul is king, but he’s pretty much done.  He was big, strong, tall, powerful – yet when David appears on the stage of history, he is small, very small.  The Bible’s quirky logic is in play: “Not by might, nor by power, but by my Spirit, says the Lord of hosts” (Zech 4:6). “There is a boy here who has five barley loaves and two fish; but what are they among so many people?” (John 6:9). “It was not because you were more numerous than any other people that the Lord set his heart on you – for you were the fewest of all peoples” (Deut 7:7). “God chose what is foolish in the world to shame the wise; God chose what is weak in the world to shame the strong; God chose what is low and despised” (1 Cor 1:27).

What were Jesse’s feelings when he learned one of his sons would be king? Pride? Shock? A fearful trembling?  The preacher can depict the lineup of sons, tallest on down, the strapping Eliab, the burly Abinadab, the chiseled Shammah, all 7 – but not one of them was the one.  The Lord’s word to Samuel – and us?  “Do not look on his appearance or on the height of his stature, because I have rejected him; for the Lord does not see as mortals see; they look on the outward appearance, but the Lord looks on the heart” (1 Sam 16:7). 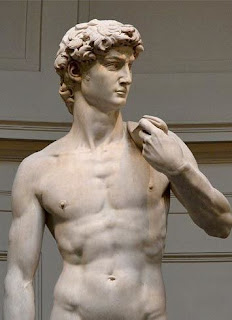 Even in church, we look to ability, strength, IQ, savvy – but it’s the “heart,” although it’s really God choosing whom God chooses.  Puzzled, Samuel shrugs – and only then acknowledges, “Well, yes, there remains yet the youngest, but he is keeping the sheep.” The obvious deduction is that Jesse didn’t even consider the possibility that this little one might be the one. But could it be that Jesse actually feared David might be the one, that he saw unprecedented potential in him – or perhaps he was simply the one he loved the most, the unexpected child of old age, the apple of his eye? The writer does take note that David “was ruddy, and had beautiful eyes, and was handsome” (1 Sam 16:12). Perhaps Jesse wanted to keep this small but handsome one home, to shelter him for himself, and from the perils of kingship. 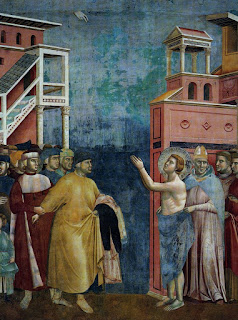 Christian history features so many stories of parents blocking their children’s calling to sainthood. Francis of Assisi’s father, Pietro, was so mortified when his son began giving to the poor with total abandon that he took him to court and disowned him. Pope Francis’s mother was crushed when he reported he was headed into the priesthood instead of to medical school, and she would not speak to him or forgive him for some time. How many women and men never became great heroes of the Church because parents restrained them, and wouldn’t let go? 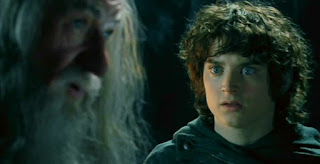 This story is about a different kind of seeing.  The verb “see” (ra’ah) occurs six times in the story of David’s anointing; “the Lord does not see as mortals see” (1 Sam 16:7). How does God see? How can we see as God sees? Can we see things as they really are instead of being deceived by what is only superficially visible? As Gandalf wrote in a letter to Frodo in The Lord of the Rings, “All that is gold does not glitter.” Or that Native American saying: “We teach our children to see when there is nothing to see, and to listen where there is nothing to hear.”   Preaching is not seeing for others, but showing them how to see.

This brings us to Psalm 23.  The Hebrew word for “see,” ra’ah, is one barely distinguishable sound away from ra‘ah, the word for “shepherd.” We might think of shepherds as lowly and despised, poor laborers of no account. Yet there is always an ambiguity to the image of a “shepherd.” Yes, they spent their days and nights out of doors with smelly animals who tended to nibble themselves lost. Mothers didn’t fantasize that their daughters would marry shepherds one day. And yet in the agrarian, pastoral culture of the world in those days, where sheep were everywhere and they mattered for survival, even the mightiest kings of Sumer, Babylon, Assyria and Egypt were often dubbed the “shepherds” of their people. 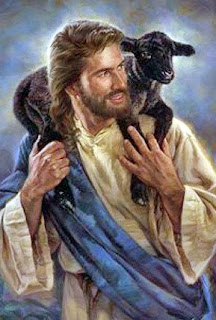 The Lord is my shepherd.  Lest we get sappy about the image, as so much kitschy church art does, I will recall the first shepherd I saw in Israel:  Elvis t-shirt, green rubber golashes, with a stick, swatting sheep, hollering expletives at them.  The Lord is like that? Or we are like such dumb sheep?

Most of us have heard the Hebrew of verse 1 means “I shall lack no good thing.”  I shall not want?  Our whole life is about wanting, even in prayer.  Maybe we are asked here to learn to want the one good thing:  God.  Psalm 27 says “One thing have I asked… to behold the beauty of the Lord.”  And Psalm 73 similarly says “For me, it is good to be near God.”  Clearly all this requires a focused re-understanding of what is genuinely good, and what doesn’t really count…

In our church, we read Psalm 23 aloud at funerals.  “Read” – but really people say it from memory, and are clearly moved.  And we use the King James Version, rightly I think…  Regardless, I’m struck by one four letter word in verse four:  thou.  This is fascinating: in the original Hebrew of Psalm 23, there are exactly 26 words before “Thou art with me,” and exactly 26 words after “Thou art with me.” Could be chance – but perhaps the poet was boldly declaring that God being with us is at the very center of our lives, the apogee of all that transpires, the focal point of the universe? God is with us. We are not alone down here. 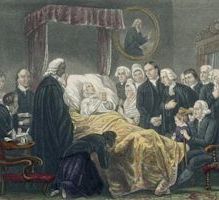 The whole Gospel is that God is with us; Jesus was called “Emmanuel,” which means “God with us.” John Wesley’s dying words were “The best of all is, God is with us.” God doesn’t shelter us from trouble, God doesn’t magically manipulate everything to suit us. But the glorious With is unassailable, unchangeable, the only fact that matters.

This marvelous news draws our attention again to the Thou. For the first 3 verses of the Psalm, God is spoken of in the third person: “The Lord is my shepherd… he leads me… he restores my soul.” But with the Thou, the third person shifts to second person: “for Thou art with me, thy rod… thou preparest a table…” Instead of talking about God, the Psalmist begins to talk to God; instead of God in the head, God is a friend in the heart, a conversation happens, a relationship grows. This is faith. This is the only true comfort. 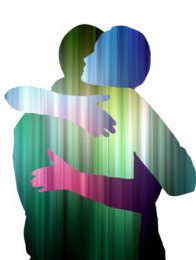 And the with isn’t just me-with-God.  It is me-with-others – and especially those with whom I’ve been estranged.  Reconciliation is our burden – and joy.  This “table” is set “in the presence of my enemies.”  Jesus said Before you come to the altar, make peace with your enemies (Matthew 5:23f) – and When you have dinner, don’t invite your friends, but the outsiders, the outcast (Luke 14).  In our day of intense rancor and derision, we are asked, invited and empowered by God not merely to think about others more happily and in light of God’s grace, but actually to break bread with them.  How do we urge our people to engage in this difficult but life-giving discipline???

How interesting is it that Psalm 23 says “though I walk through the valley of the shadow of death” – the key word being “through.”  We don’t move into the valley and camp there; we get through it, not by dint of will, but by God’s mercy.  And then the climax: “And I shall dwell in the house of the Lord forever” (Psalm 23:6).  Perhaps T.S. Eliot was right: “The end of all our exploring will be to arrive where we started and know the place for the first time.” Or consider this: if you are lucky like me, you have fond memories of summertime junkets to the home of your grandparents. For me, it was a house that is factually small now when I drive by as a grownup – but as a child it was large, large in love, large in special treats, large in cousins and fun, another home, one without problems or homework or chores, a special place of a more unconditional kind of love. Does God give us such places in our memory so that we will learn to desire the home for which God destines us when this life is over? 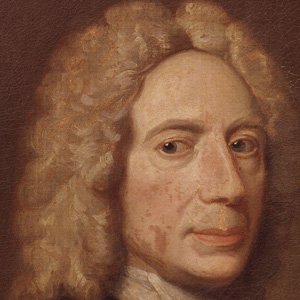 Isaac Watts, as he wrote marvelous hymns, often recast Psalms into slightly different language. His metric version of the 23rd Psalm is eloquent, elegant, moving: “The sure provisions of my God attend me all my days; O may Your House be my abode, and all my work be praise. There would I find a settled rest, while others go and come; no more a stranger or a guest, but like a child at home.” 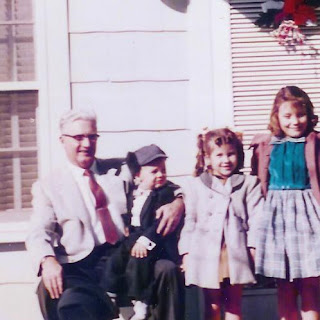 Like a child at home. Yes, some children bear the misfortune of a home that is more warfare than peace, more division than love. But the very fact that we recoil at the idea of any child anywhere not enjoying peace and love at home is evidence that God has wired into our hearts a keen sense of a proper destiny – which looks like me as a boy at my grandmother’s table or on my grandfather’s lap (yes, that's me in 1956). Various happenings in the life we know here strike us as urgent, they make us anxious, or perhaps we have some fun or face trials. But it is all a preparation for a grand homecoming, when we will “find a settled rest… no more a stranger or a guest, but like a child at home.” Or as the Psalmist sang, “And I shall dwell in the house of the Lord forever.”

** I have now posted for Palm Sunday, Maundy Thursday, Good Friday, and Easter, if you are working ahead.