What can we say January 9? The Baptism of the Lord 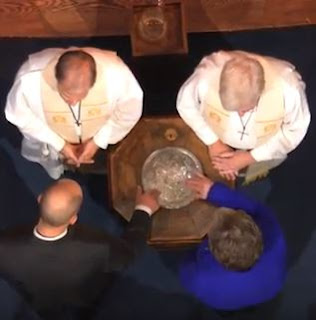 The renewal of Baptism we do on this day, as much as any service all year, moves me. Seeing the people in line, dipping a finger into the font, touching their foreheads, mouths, making the sign of the cross occasionally, each one bringing some hope, expectation, hopefully zeroing in on the whole point of a new year.

Isaiah 43:1-7. Jesus, and John knew their Scriptures – so did this eloquent moment in Isaiah occur to either or both as Jesus stepped into that stream, and a voice was overheard from heaven? “Do not fear, I have redeemed you, I have called you by name, you are mine.” So insistent! “When you pass through the waters, through the fire…” The Jordan waters were overflowing with historical memory as Jesus passed through – and there’s some fire in the way the Baptism is narrated! Then, Isaiah revealing God’s words: “You are precious in my sight – and honored! And I love you!” Pondering this, we realize the Baptism was super-special, but in full continuity with the heart of God for centuries, the latest chapter in a long narrative of “Don’t fear, I call you by name, you are precious.”

Acts 8:14-17. With no New Testament, no catechism, no books of theology, it’s no wonder the early Christians were baffled and utterly mixed up about Baptism. In the Holy Spirit? What? You only baptized using Jesus’ name? What an egregious error! I could theologize about Baptism, the Spirit’s role in it, etc., but this little text leaves me a little cold, and maybe baffled with the first guys standing around with quizzical looks. 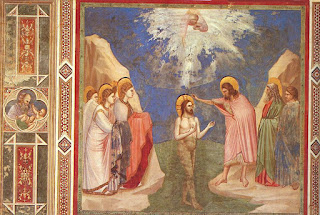 Luke 3:15-17, 21-22. Open up your Gospel parallels, and you notice Luke is onto some interesting stuff. “As the people were filled with expectation, and all were questioning…” Not just seeking to repent and be cleansed, but rippling with anticipation, and asking a lot of questions! – which must be good, despite clergy and parent compulsions to be answer-people. The Greek rendered “questioning” is dialogizomenon. They were dialoguing! I’d love to listen in on those conversations! Fitzmyer translates this nicely: “They were piqued with curiosity.” 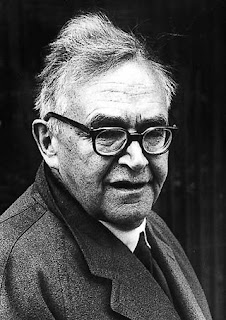 Unlike many of our baptisms, nothing sweet unfolds, no grinning families posing for Facebook. There’s a purifying, judgment, the fire. Søren Kierkegaard’s ribald mockery of thinly religious people bringing infants for the sacrament, Karl Barth’s decision to oppose infant baptism (including for his own children!) after his jarring pastoral experience of its trivialization – or Annie Dillard’s jaunty counsel that we should wear crash helmets in worship: countless thinkers shout to awaken us to the weightiness of baptism. 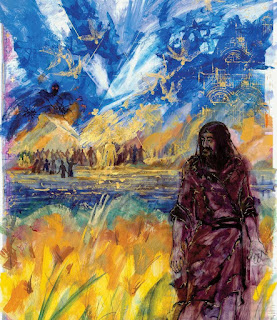 Luke understates the physical baptism itself, instead fixing our attention on what Jesus did immediately afterward (and it's the afterward that is depicted in the Saint John's Bible!): “When Jesus also had been baptized and was praying.” He was praying. And then – then! – the heavens opened. The Greek verb borders on the violent: schizomenous is more like “ripped open” (captured, maybe, in Giotto's messiness at the top of his fresco in the Scrovegni Chapel, depicted above). If something opens, it can close easily. But if it’s ripped open, lots of luck getting it closed! Through that permanently ripped open heaven, the Spirit descends on Jesus, “in bodily form” Luke says, like a dove. And the voice: “You are my Son, the Beloved; with you I am well pleased.” Is it a faithful theological move to turn that “You are beloved” on the congregation?

The dove transports us back to the ark, the bird of redemption as the perilous floodwaters subsided, an airborne sign of God’s presence, and assurance. Notice this is the first, and maybe the clearest, mention or explication of the Trinity in Scripture. No wonder we use the Trinitarian formula in Baptism! No theological postulates or explanations about this Threeness in God. It’s a story, it’s all relationship, everybody else gets drawn in. 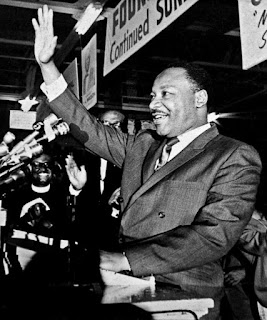 Theologians have fretted over why Jesus was baptized, being sinless. Clearly he comes to the river to be one with us, to bear the sins of others, indeed of the world. I’d fret more over the idea here that the heavens were visibly opened. Everybody got a glimpse into whatever’s up there. Streets of gold, pearly gates, angelic choirs with harps? I can’t preach on the heavens being ripped open without recalling Martin Luther King’s last sermon in Memphis: “It’s alright to talk about ‘long white robes over yonder,’ in all of its symbolism.  But ultimately people want some suits and dresses and shoes to wear down here.”
Posted by James C. Howell at 9:23 AM