What can we say June 20? 4th after Pentecost

1 Samuel 17. That children love the David and Goliath story should give us some pause. It’s violent, ending in decapitation! Perhaps children, being small, love the small one winning – although I suspect Francesca Aran Murphy (in her fine Brazos commentary) is right about us adults and this story: “We yearn to believe that ‘strength is made perfect in weakness’ (2 Cor. 12:9).”

I’m not a fan of Richard Gere – but gosh, he was marvelous in the film King David! The Goliath scene is exceedingly well-done – although I’d also commend the way Brad Pitt played Achilles in his one-on-one contest with Boagrius in Helen of Troy! Our lection isn’t about the underdog winning against all odds. It’s about who’s God, and who isn’t – a theological contest waged then and now.

David has been toting his brothers’ lunchboxes when they are off at war when he stumbles into his dramatic moment. The details make the story: Goliath’s armor weighs 5000 shekels. Saul’s armor is way lighter, but still too heavy for this lad. Goliath is 6 cubits and a span (9’ 6”) – and this is clearly our most fascinating textual variant maybe in all of Scripture: the Dead Sea Scrolls manuscript of 1 Samuel has him at a mere 4 cubits and a span (6’ 6”) – huge by ancient standards! Copyists were more likely, over time, to make him taller – like the proverbial fish I caught. 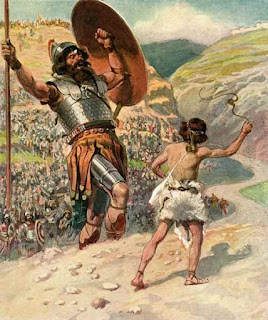 David bravely offers to fight – laughably. Saul scolds him: “You are not able to go” – perhaps reminding us of the hymn “Are Ye Able, said the Master.” The sturdy dreamers, those eager beaver disciples, answer Yes! – but of course, they are not able. David is able. Or lucky? His slingshot accuracy: was that little rock divinely guided? Sheer luck? Or was he a genius of a marksman (a marksboy)? Who knows? Preachers can leave such questions dangling – as that very uncertainty is the way we experience God, or luck, or some mix of those and skill and effort in daily life.

David has a sharp tongue, considerable sass, his mocking verbiage more eloquent and nasty than Goliath’s. Who’s God? “A little child shall lead them,” and show them God – as Jesus would suggest that we too must become like children. I preached from this text at my aunt’s funeral. It struck me as fitting, with Jesus the Rock of Ages felling the giant, Death – but then I wonder if it’s easier to declare this in the hour of death than in the daily rigors of battling addiction or culture or depression or… fill in the blanks with the giants not so easily toppled. Again, in the sermon, it’s really fine to name this. People know already.

2 Corinthians 6:1-13 won’t be my preaching text. But as I often do, an unused lectionary text can speak to me as a person and as a pastor. My life in ministry has its sufferings – but so paltry compared to what Paul endured. And yet I feel embraced by him and his story. I’ve not borne beatings. Well, verbal beatings, yes… I’ve not been imprisoned for my ministry, but I’ve barely made it through many sleepless nights. Ill repute, yes – and treated as an impostor, for sure. Sorrowful? On even the most fruitful days in pastoral life, maybe especially on those days. Paul is generous to enfold me in his experience and love. 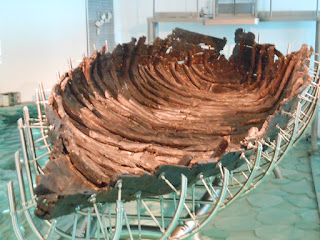 Mark 4:35-41. Jesus stills the storm from a small wooden boat in the teeth of a vicious storm. Archaeologists discovered that boat from Jesus’ time. Fabulous! But would you want to be in this thing weathering a major storm? I saw Walter Kimbrough preach on this once – walking down into the crowd, grabbing the guy on the end of the first pew and shaking him as he renarrated that “Wake up! Don’t you care if we perish?” moment. I tried this myself. People were as stunned as the disciples when the storm abated. 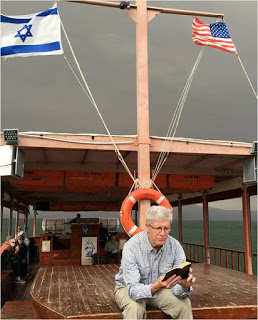 God does not mind if we ask, Did these stories about Jesus really happen? Or are they symbolic? I suspect the answer is Yes? Jesus and the disciples leave a crowd on the shore to cross to the other side of the Sea of Galilee. Not all that far, maybe 3 or 4 miles. You can see all the way across. You probably know that this body of water is legendary for the sudden irruption (eruption!) of wind gales and terrible waves. The photo here is of me reading this story to pilgrims from our church travelling with me. When I opened the Bible, the sun was out and it was pretty calm. By the time I’d gotten people’s attention and read just these 7 verses, the wind was howling, and in another minute sheets of rain were pelting us and the ship was rocking nauseously.

Such a storm overtook the disciples in a far smaller boat than the one we were in. Terrified disciples, having lots friends and maybe family in such wicked storms, panic – and remember Jesus is with them. And he is – astonishingly – asleep on a cushion. Lucky cushion… Easy to imagine them shaking him, startling him, as they ask “Don’t you care if we perish?” It’s not at all that he doesn’t care. He’s just the ultimate “non-anxious presence.” It’s as if he is enacting for them, and us, that verse from Psalm 46: “Be still, and know that I am God.” 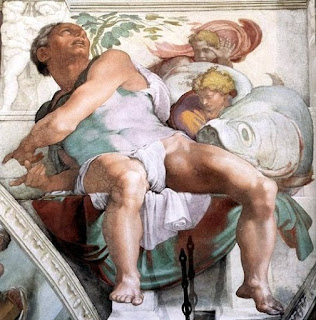 Not flustered in the least, Jesus stands up and speaks: “Peace. Be still.” Quirky question: was he speaking to the storm? Or to the quaking disciples? Yes? I hear echoes of the story of Jonah here. Storm rising, main character asleep, then the storm calms – and yet Jonah is the antithesis of Jesus. He’s on the run away from God, so terrified that he sleeps a sleep of denial. Mark 4:35-41 invites us to notice Jesus is with us in our storms, that he is the bringer of peace, that ours is to heed his call and not be like Jonah – and that God’s business isn’t just private, human souls but all of Creation.
Posted by James C. Howell at 10:03 AM