What can we say November 14? 25th after Pentecost

I love the story and song of Hannah in 1 Samuel 1:4-20, 2:1-10. After commenting on the Epistle (briefly) and the Gospel (a bit more) I’ll return to this text, with an extended excerpt from my book, Weak Enough to Lead, which I hope captures the wonder, agony and hope of this moment (with a great quote from another Hannah, Wendell Berry’s Hannah Coulter). 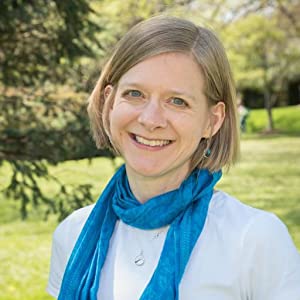 Hebrews 10:11-25, for me, continues the circling of Hebrews – so not sure I’ll preach the Epistle. I am intrigued by the idea of, because of all Christ has done, “Let us approach with a true heart… Let us hold fast to the confession without wavering.” In her way cool book, The Beatitudes Through the Ages, Rebekah Eklund explores what guardrails there might be on the multifarious interpretations of Scripture – and points to Perpetua and Felicity, two canonized martyrs who stood their ground, refusing to knuckle under and abandon their belief. How are they different from today’s church people who want to split up over doctrine? They didn’t harm others, whereas today’s peace-breakers do! “Let us hold fast,” indeed, but who’s harmed when I hold fast?

“Let us consider how to provoke one another to love and good deeds.” Dangerous, as it can slip into nagging judgmentalism: Hey, you should love and do good deeds! And yet, so very hopeful. What if we took as our mission statement that we might not only love and do good deeds, but actually provoke others to do the same – not as in needle or cajole, but inspire, doing good with them? The verb paroxmuson implies inspiring more than provoking. 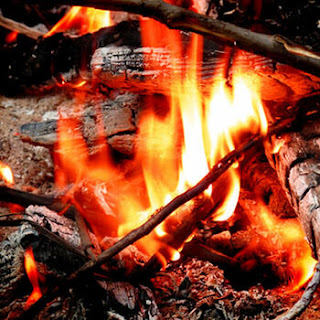 “Not neglecting to meet together, as is the habit of some, but encouraging one another.” Indeed, perhaps especially post-pandemic, people are happy to neglect meeting together. There’s this story from John MacArthur that preachers love to tell. A man who had once been active in a church stopped coming, and after a few weeks the pastor decided to visit him in his home. When the pastor arrived, he found the man sitting in a chair in front of his fireplace where a fire was roaring. Without saying anything, the pastor took a seat beside the man and sat in the silence, watching the flames.

After a few minutes, the pastor reached for a pair of tongs and pulled a single, burning ember out of the fire, setting it off to the side on the hearth. Before long, the ember’s flame had reduced to a glow, and then it went out completely, eventually growing cold. The pastor and the man sat in silence a bit longer, and then the pastor again took the tongs, picked up the dead ember, and put it back in the middle of the fire, where it sparked back to life. As the pastor got up to leave, the man spoke for the first time, saying, “Thank you for your visit, and especially for the fiery sermon. I’ll see you on Sunday.” 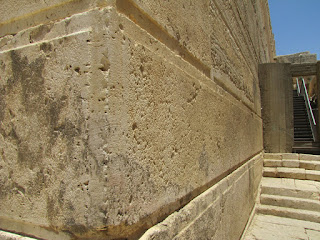 Mark 13:1-8. I just adore the way the disciples’ jaws gape open at the sight of Herod’s temple – which still has that impact on pilgrims today. “What large stones!” indeed. We can inspect many astonishingly large stones from that temple – one of which is 40 feet long, 11 feet tall, weighing in at 300 tons! Herod’s recently completed platform, 900 by 1500 feet, of gleaming, flawlessly cut ashlars. A wonder of the world – Herod’s clear intent, both from ego and his desperate need to impress his former foe, the emperor Augustus. 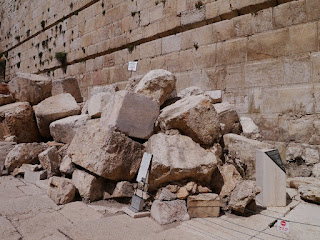 Jesus throws cold water on these country boys, slack-jawed in amazement, with his prophecy that not one stone will be left upon another. A few actually did remain after the catastrophe of the Roman crushing of the Jewish revolt in 70: the Western Wall, today’s “wailing wall,” still there. Did Jesus have a crystal ball type prediction? Or was it more rational, wise, insightful? Pompey had invaded the holy precincts, Herod erected a Roman eagle on the entrance, Caligula crafted a statue of his divine self to be placed in the Holy of Holies. Trouble was indeed coming.

Jesus goes apocalyptic – which is a feature in preaching and theology we might avoid, given all the abuses of Gnostic end-of-time predictions. Yet at some point, the only shred of hope we have left is for God’s ultimate intervention beyond history itself. Jesus, unlike other apocalyptic writers, so productive in those days, reports no visions, but speaks only of his own authority. 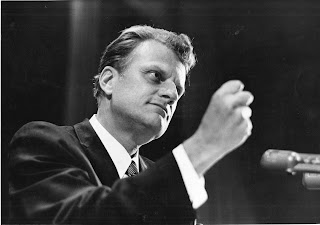 I recall as a boy watching Billy Graham preaching on “Nation will rise against nation,” and he explained this was precisely what was unfolding in the 1960s. Fact is, if you study history, it’s always this way. Peace is our dream that in our gut we know is a fantasy. So much pain. Jesus opens a window of hope, explaining that our intense sorrow over the world now can be compared to labor pains. Wow. Although it tiptoes into being silly, there’s a way to reflect on those birthpangs: 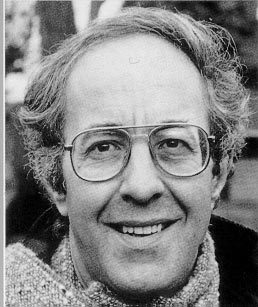 With a playful imagination, Henri Nouwen (in Our Greatest Gift) pondered these pains that ferry us into life. In Our Greatest Gift, his thoughtful book about dying, he tells a story about fraternal twins talking with one another in the womb: The sister said to the brother, ‘I believe there is life after birth.’ Her brother protested vehemently, ‘No, no, this is all there is. This is a dark and cozy place, and we have nothing to do but cling to cord that feeds us.’ The little girl insisted, ‘There must be something more than this dark place. There must be something else, a place with light, where there is freedom to move.’ Still she could not convince her twin brother. After some silence, the sister said hesitantly, ‘I have something else to say, and I’m afraid you won’t like that either, but I think there is a Mother.’ Her brother became furious. ‘A Mother!?’ he shouted. ‘What are you talking about? I have never seen a mother, and neither have you. Who put that idea in your head? As I told you, this place is all we have. Why do you always want more? This is not such a bad place, after all. We have all we need, so let’s be content.’ The sister was quite overwhelmed by her brother’s response, and for a while didn’t dare say anything more. But she couldn’t let go of her thoughts, and since she had only her twin brother to speak to, she finally said, ‘Don’t you feel those squeezes once in a while? They’re quite unpleasant and sometimes even painful.’ ‘Yes,’ he answered, ‘What’s so special about that?’ ‘Well,’ the sister said, ‘I think that these squeezes are there to get us ready for another place, much more beautiful than this, where we will see our Mother face to face. Don’t you think that’s exciting?’ The brother didn’t answer. He was fed up with the foolish talk of his sister and felt that the best thing would be simply to ignore her and hope that she would leave him alone.

If we turn back a few pages, we discover the real dawn of a new day for Israel was not when Saul was crowned, but when a woman, a nobody, unable to conceive, surprisingly gave birth to a son – as if the script for what would unfold for Mary and Jesus fluttered down to earth centuries earlier. Hannah was barren, which was the ultimate weakness for women in the Bronze Age. She had nothing going for her except the tender love of her husband, Elkanah. She was taunted by her rival, Peninnah, whose cruel words twisted like a knife in her gut.

Hannah did what the helpless do: “Hannah rose and presented herself before the Lord… She was deeply distressed and prayed to the Lord, and wept bitterly” (1 Sam 1:9-10). Anguished prayer is weakness splayed all over the floor. Eli the priest observed her, and assumed she was drunk. Then he took pity on her. Or perhaps he realized he was witnessing what every priest longs to see: a soul entirely abandoned to God. He blessed her. And then this woman, with no natural strength in her womb, conceived and bore a son, Samuel.

The mind-boggling wrinkle in Hannah’s story, though, isn’t the seemingly miraculous birth. What staggers us is that she kept an outlandish promise she had made in her desperation. Trying to coax God into giving her a child, she pledged to give that child right back to God. She could easily have reneged on the deal once she cradled her precious son in her arms, nursing him, giggling with glee over his arrival. He was all she’d ever wanted. And in those days, a son was your social security, the one a woman needed to care for her in old age.

There is a kind of holy leading the world will never understand. After his election, Pope Francis handed back the powers of the papacy he’d just won, riding in a Ford Focus instead of the papal limousine, moving into a guesthouse instead of the Apostolic Palace, wearing a simple cassock instead of regal finery. Henri Nouwen left a faculty position at Harvard to live in a L’Arche community in Canada, where his job was to care for a single, severely handicapped young man named Adam. Maybe the most effective pastor I’ve ever known declined multiple promotions, quietly mentored dozens of young clergy, and in her parishes she happily beamed offstage as her laity excelled as they never had before.

Imagine all those obscure people who have led so marvelously that we have never heard of them. Leadership is letting go, a refusal of possession, control or manipulation, an offering to God. Letting go must be the secret to leadership, since it is the secret of all of life; the results are those immeasurables, like contentment, gratitude, and the flourishing of others. 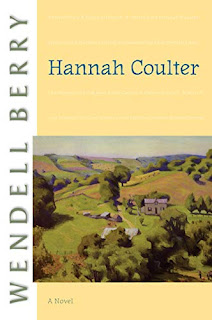 I love Wendell Berry’s novel about a Kentucky farm mother, Hannah Coulter, who muses, “The chance you had in life is the life you’ve got. You can make complaints about what people, including you, make of their lives after they have got them, and about what people make of other people’s lives, even about your children being gone, but you mustn’t wish for another life. You mustn’t want to be someone else. What you must do is this: ‘Rejoice evermore. Pray without ceasing. In everything give thanks.’ I am not all the way capable of so much, but those are the right instructions.” Leaders let go of fantasies and selfish wishes, resentments and any sense of entitlement or deserving. How counter-cultural! Leaders can be content; we already have enough, and so we are freed for joy. Who wouldn’t follow a leader to a place of joy?
*** 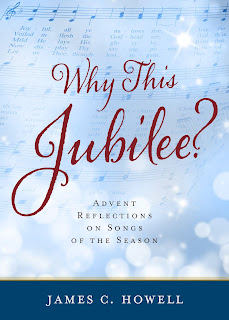 My little book of theological reflections on lines and characters in Christmas carols might bless your people and your preaching! Why This Jubilee?: Advent Reflections on Songs of the Season.
Posted by James C. Howell at 9:34 AM