What can we say February 14? The Transfiguration of our Lord 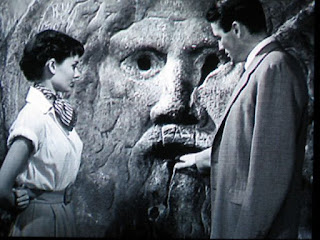 Is this early for Transfiguration Sunday? And it’s Valentine’s Day. St Valentine, a 3rd century Roman priest, martyred, buried near the Milvian Bridge (historic with Constantine!) outside Rome. Oh my. His skull (relics?!?!) is housed in Santa Maria in Cosmedin, the church in Rome with the “mouth of truth” made famous by Gregory Peck and Audrey Hepburn in Roman Holiday. Are there truth issues to be raised this Sunday? 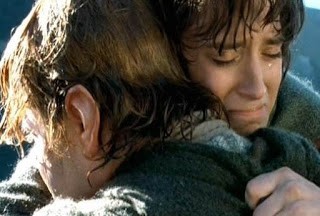 2 Kings 2:1-12. To me, like so many biblical stories, there’s not a “go thou and do likewise” moment. Just be dazzled by the biblical story, its characters, our spiritual ancestors. Thank God for them. Elisha, although Elijah seems to be trying to get rid of him, won’t leave him alone – maybe like Sam with Frodo in the Lord of the Rings. Frodo, at the end of the 1st movie, says, “Go back, Sam. I’m going to Mordor alone!” “Of course you are,” responds Sam, “and I’m coming with you!” He plunges into the river, gets in over his head and almost drowns before Frodo pulls him into the boat. Once Sam catches his breath, he explains: “I made a promise, Mr. Frodo. Don’t you leave him, Samwise Gamgee, and I don’t mean to.” 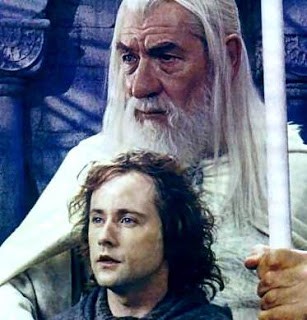 The mantle is intriguing; Gandalf rather unwisely left the course of affairs in Middle-earth to the diminutive, fun-loving, timid Hobbits. “Despair, or folly?” said Gandalf. “It is not despair, for despair is only for those who see the end beyond all doubt. We do not. It is wisdom to recognize necessity, when all other courses have been weighed, though as folly it may appear to those who cling to false hope. Well, let folly be our cloak, a veil before the eyes of the Enemy!”

As dogged as Sam, Elisha would not leave Elijah alone, although Elijah tried to shed Elisha like a pesky gnat. Why? Biblical narrative habitually refrains from reporting motivations and feelings. Was he sparing Elisha? Did Elijah simply prefer to die alone? When Jesus, who like Elijah had miraculously fed the hungry and healed dozens and gotten cheeky with the powers that be, said, “I go to prepare a place for you,” did the disciples think of Elijah trudging off to die alone? 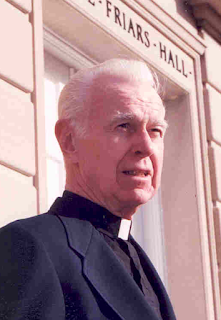 I think of Roland Murphy, the Carmelite Old Testament scholar who was my dissertation adviser and lifelong mentor. He shared a lot of wisdom with me; I never made an important decision without exploring things with him. But he did not, as he could not, vouchsafe to me what his dying moments were like, or what he saw when the door of this life closed and he took the first step of his journey into . . . we do not know. He died on the feast day of Elijah—fitting for a Carmelite, and a Hebrew Bible guy! Were there chariots or some dimly lit, beautiful silence? We trust, perhaps because we harbor in our souls some mysterious confidence that all must be well with someone who lived so well and loved us so well. 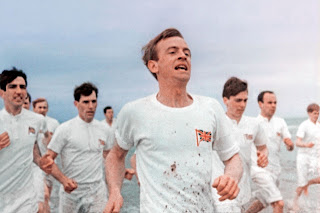 Like the bush in Exodus 3, the fire of the horses and chariot here are not consumed – and do not consume Elijah! The film, “Chariots of Fire,” ruminates on the lives of Eric Liddell, a Christian who runs for God’s glory, and Harold Abrahams, a Jew running to defeat prejudice. With Liddell in particular, the clash of his simple, holy commitments to God with the world might seem old-fashioned, but sometimes it’s the old-timey story that awakens us to the craziness of our own world.

2 Corinthians 4:3-6. The Gospel really is veiled – and that’s not all bad. Paul’s exclamation that “We do not proclaim ourselves” is probably important for clergy to ponder privately and deeply – but do you do this in a sermon? 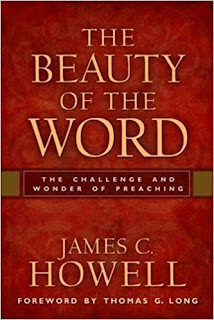 Mark 9:2-9. When I try to wave my magic wand over the world of homiletics, the Transfiguration is the first text I point to – as it is the prime example of the understandable but deeply flawed way even well-meaning preachers take a text that is most clearly about God, and try to turn it into something about us.  In my preaching book, The Beauty of the Word (my book, not about how to preach, but how to continue preaching!), I explain how so many texts are about how amazing God is – and it’s sufficient just to ponder the amazingness of God in the sermon! But we have to make it about us, our faith, our to-dos, our doubts, our serving… and then we struggle and wind up botching things.

With the Transfiguration, I’ve read and heard so many sermons like a few I tried when I was young – with some ridiculous attempt at “Okay, you have a mountaintop experience, and then you go back down into the real world…” All 3 Synoptic versions of this moment have as their “point” the simple fact that Jesus is amazing, someone to be worshipped, gawked at, and the only takeaway is to be lost in wonder, love and praise. Mark shows us the way the plodding disciples tried what preachers try: Lord, let us do something. Let us build three booths!  Mark’s comment reveals a kind of mercy on them, and on us: “For they did not know what to say.” Indeed. Like the preacher coping with this text, too marvelous for mere words. 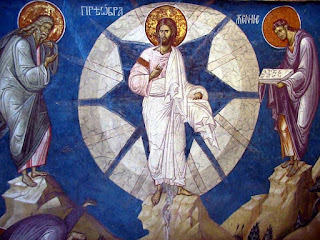 What the preacher knows to say is that Jesus quite shockingly started glowing, shining; the Greek means literally metamorphosized. He shimmered. No ordinary guy, this Jesus; we get a preliminary peek into his eternal glory. The only conceivable responses are recorded in Scripture. In Mark, Peter does offer the greatest understatement in religious history: “It is good that we are here.” Matthew 17:10 is even better: “And they fell on their faces in awe.” 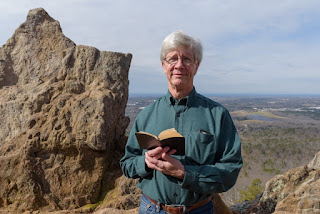 And he was on a mountain - where amazing Bible things happen. Mountains, especially huge, craggy, ice-capped ones, like in Switzerland, are what philosophers point to as distinguishing "beautiful" from "sublime." The "sublime" has a rougher, if impossible accessibility. It's beautiful, but scary, a bit - and you can't just clamber up to the top. There's some peril, risk - maybe like God... Since we show little videos compiled to make up an online worship service, my wife and I climbed a nearby mountain and shot video of this Scripture reading. 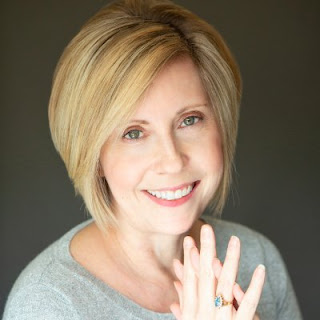 And speaking of mountains: Lisa Deam, in her wonderful new book, 3000 Miles to Jesus, looks at medieval pilgrims and their arduous pilgrimages to Jerusalem as a lens through which to view the spiritual life. She points out that they had to cross the Alps; each one "came face to face with a wall of ice and rock." They made their way to St. Bernard's Pass - which my son and I did, aided by a train and then a bus most of the way... That was daunting, wonderful, exhausting. I can't fathom a lonely mystic like Margery Kempe even attempting this, carrying all her things and terrifyingly isolated, in 1413, having already walked 700 miles. 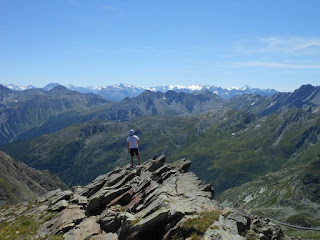 Imagine the pilgrim battling the elements. No wonder St. Bernard built a hospice at the top (and yes, the dogs are bred there!). Growing in prayer is like surmounting such a mountain pass. As Deam reminds us, "Medieval mystics remark on the challenges of prayer so frequently that it is a wonder any of us attempt this inner journey."
There's an echo in Jesus' transfiguration in Mark 9 of his even greater metamorphosis. The cloud "overshadowed" them (v. 7) - the same verb (episkiazousa) used of what happened to Mary when Jesus was conceived (Luke 1:35). This overshadowed one gave birth to God's "beloved Son," so announced at the opening of his ministry (at the Baptism), and now as we move into the final act of Mark's plot. All 3 moments embody what Paul wrote in Philippians 2: "Though in the form of God, he emptied himself." That is the metamorphosis - seen sort of in reverse in the Transfiguration! And then his risen body too, of course...


I want to preach the sermon that simply causes me and my people to say “Surely the presence of the Lord is in this place – and it is good that we are here,” or that would make me and them simply blush in awe. This sermon won’t attempt to resolve any personal or societal dilemmas, it won’t allow notes to be taken to put into practice on Tuesday morning, it doesn’t even try to get me to do anything but observe a bit of a sabbath from doing things like building booths or even being religious, and simply let my jaw drop over how cool, how very different and glorious this Jesus is.

I have attempted this myself a few times in sermons. Mind you, the material extolling the beauty and glory of Jesus is plentiful. The birth, the incarnation – God becoming small to show us God’s heart. Wow. Jesus’ words, his holiness, the people he touched, the marvel of his healing. The temptation narrative (another one we botch by making it about how we overcome temptation): we see Jesus achieving what you and I wouldn’t have a prayer of doing – resisting the devil’s seductive allure. His suffering in silence, his compassion on the soldiers who just nailed him up, his tenderness toward a thief, his love for his mother. “What wondrous love is this?” 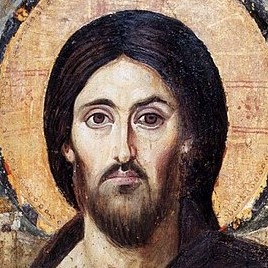 Am I veering from Mark 9? I don’t mind if I do – but the timing of Mark 9 invites this very speculation: Jesus has just asked the disciples about his identity, and he has just explained his vocation to go to Jerusalem, suffer and die, despite the strenuous objections of those who knew him best. Jesus.  His resurrection, and ascension.  Gee, I’m going to need a heckuva lot of time to explore “Fairest Lord Jesus, Beautiful Savior.”

The only remote takeaways might be two: first, to try to do the awe thing every day… and then second, as the voice from heaven (which echoes the voice at Jesus’ baptism) quite sensible suggests, “Listen to him.” Yeah, the guy who glowed, the one who is God and who healed and touched the untouchables and gave his life? Listen to this guy and not all the other pretenders who’ve frankly never glowed for a nanosecond.